Ten years ago, on November 7, 2007, more than 53,000 gallons of heavy oil spilled into San Francisco Bay. The disaster happened when a 900-foot container ship, the Cosco Busan, side-swiped a Bay Bridge tower, gashing open two of the ship’s fuel tanks.

The damage was compounded because the ship initially reported that only 400 gallons had spilled. But the tide soon washed an unexpectedly long plume of thick, floating oil south of the bridge. When the tide turned, the oil surged out the Golden Gate and blackened Baker Beach, Ocean Beach, Muir Beach, Rodeo Lagoon and more coastline north and south. Flood tide washed oil back into the Bay, coating the shorelines of Alcatraz, Angel Island, Richardson Bay and the East Bay.

The response by government agencies tasked with oil spill cleanup was uncoordinated and inadequate. Many local agencies, municipal officials and thousands of would-be volunteers wanted to help prevent damage to sensitive shorelines. But they were left out of the response efforts. Skimmers—specialized equipment used to remove oil from the water’s surface—were not deployed until most of the oil was too dispersed to be cleaned up.

More than 6,500 birds died, with two species, western grebes and surf scoters, hit hard. Getting coated with oil destroys a bird’s natural waterproofing. Instinctively, they preen their feathers to restore waterproofing, in the process ingesting oil, which can poison them. Much of the year’s herring eggs and many small creatures at the base of the Bay’s food chain were also killed. Fifty beaches and shoreline parks were closed, some for longer than a month.

In the decade since, Baykeeper has been formally collaborating with government oil spill response agencies to prevent other oil disasters like this. We also took part in a post-spill review process with the agencies, then successfully sponsored nine major new state oil spill laws. The laws mandated important changes, including improved coordination between agencies, better support for oiled wildlife care and increased funding for oil spill response. Systems are now in place to train skilled volunteers in advance, and, if a spill happens, to inform local agencies in a timely manner, so they can protect shorelines from oil.

As a result, oil spill response has improved. During smaller oil spills that have occurred after the 2007 spill, authorities have been better coordinated and have acted more quickly to try to contain and remove the oil. 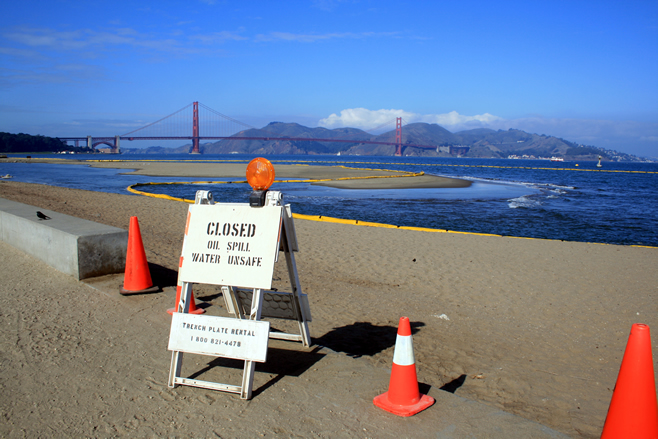 But oil spill response and cleanup technology is not perfect. Oil spilled in moving water like the Bay is difficult to contain and remove, especially if it is heavier sinking oil. The only way to make the Bay safer is to prevent oil spills.

That’s why Baykeeper and our partner community and environmental groups oppose the oil industry’s current push to expand oil refining around the Bay. Together, we stopped a new oil storage facility proposed for Pittsburg and an expansion proposed at the Valero oil refinery in Benicia. Now, we’re advocating to prevent Phillips 66 from increasing the number of oil tankers carrying heavy crude oil across the Bay to its refinery in Rodeo. These expansion plans dramatically increase the risk of oil spills.

From stopping oil industry expansions to improving preparedness, the Bay Area can do more to prevent another oil spill disaster. Ten years after Cosco Busan, Baykeeper remains determined that the Bay’s wildlife and shorelines will have the strongest protections to reduce the risk of oil spills, and the most effective cleanup possible if spills occur.