Changing the Fate of the Bay 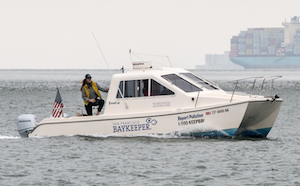 Anti-pollution laws were not being enforced. Polluters were dumping waste into the Bay with no fear of detection. The Bay was being slowly poisoned and there was no relief in sight.

Mike set the course Baykeeper still pursues today: patrolling the Bay by boat, finding and stopping polluters, and defending the Bay from the biggest threats.

Stopping contamination from oil refineries. The Bay Area’s five refineries are significant sources of the pollutants selenium and mercury, toxins that cause severe deformities and illness in wildlife and people. In the 1990s, Baykeeper sued a major Bay Area oil refinery—owned at various times by Unocal, Exxon and Tosco—and forced them to reduce the dumping of selenium into the Bay. We’ve also strengthened laws that reduce mercury pollution from refineries.

Fighting expansion of coal and oil around the Bay. In recent years, Bay Area oil refineries have proposed to expand, and developers have pushed to make the Bay Area a hub for the export of dirty coal. Baykeeper joined with community groups and together, we’ve stopped two major oil refinery expansions—and no new coal terminals are being built.

Making the Bay safer from oil spills. When the container ship Cosco Busan spilled 53,000 gallons of oily fuel into the Bay in 2007, Baykeeper discovered significant weaknesses in how local, state, and federal agencies responded to oil spills. Because of those weaknesses, oil contaminated and closed 50 beaches, damaged wildlife habitat, and killed thousands of birds.

Getting rid of the Ghost Fleet. For decades, 57 decaying surplus military ships stored in San Francisco Bay poisoned the ecosystem. Baykeeper sued, and over a 7-year cleanup period, the federal government was forced to remove all the toxic ships. The cleanup will prevent 50 tons of dangerous heavy metals, 38,000 cubic yards of toxic PCBs, and 14 million gallons of oil and wastewater from entering the Bay.

Reining in industrial pollution. More than 1600 industrial facilities operate in the Bay Area. When they’re not operating responsibly, they dump water contaminated with toxic chemicals and metals into local creeks and the Bay. We’ve held more than 250 of the biggest polluters legally accountable to ensure they’re reducing their pollution.

Keeping raw sewage out of the Bay.The Bay Area’s aging sewer systems need significant repair. Every rainy season, local sewer systems discharge raw sewage into the Bay and local creeks. It harms wildlife, swimmers, and others near the contaminated waters.

Baykeeper identified the top polluting cities. Our strategic lawsuits have helped them leverage financing for system-wide repairs and upgrades that prevent millions of gallons of sewage pollution from entering the Bay every year.

For 30 years, facing down constant threats and major polluters, Baykeeper has been a fierce champion for San Francisco Bay. And for the next 30 years, we’ll continue to protect the Bay we love.