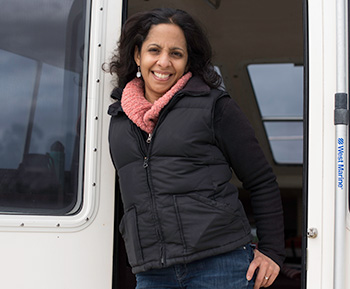 California lives in our collective imagination as the land of golden dreams and limitless opportunity. We think of sparkling beaches, rushing rivers and powdery mountains, gold nuggets lying on the ground for the taking, and a veritable Eden of farmland so fertile that its destiny must surely be to feed the rest of the world.

But the state isn’t living up to our dreams. We have a serious housing crisis, crumbling infrastructure, frequent oil spills, raging fires, surges in coastal flooding, and regular droughts that can last for several years—and the looming climate crisis will make many of these realities even more dire.

Even California's supposed Eden is in reality an arid desert. Rather than live within the bounds of nature, federal and state leaders decided years ago to reroute entire rivers and convert that dustbowl into a mythic garden. Now, state and federal agencies divert much of the water from the San Francisco Bay watershed to maintain lush farmlands.

I really can't blame big landowners for taking advantage of the situation. If the government is offering millions of acre feet of water and ensuring that supply through multi-year droughts, then why say no? There's a profit to be made in nuts and rice, even though these wet-weather crops shouldn’t grow in a desert. And if you've relied on this water for years, and built a business based on the artificial abundance, it's reasonable to feel resentful when it becomes clear that this windfall can’t continue forever.

Despite the occasional rainy day, California is now entering the third year of a severe drought, and scientists suggest this dry spell could be catastrophically long. Yet the agencies divvying up the state's water supply have failed to plan accordingly. They don’t have long-term solutions that would secure California's water supply for future generations. And Governor Newsom seems unwilling to get down to the serious work that's required. Instead, he’s directing his agencies to exploit legal loopholes and emergency drought declarations—which just makes a bad situation worse.

But it’s not too late, if California acts now. The state can provide incentives to farmers to plant crops that grow within the amount of water that's naturally available in their area. The state can also encourage fallowing crops in dry years. And the Newsom administration can incentivize other uses of land that should never have been farmed in the first place: Marginal farmland can be used to produce clean energy, for example. After all, there are no inherently bad crops, just bad choices of where and how to grow them.

Perhaps most urgently, state agencies need to plan as though the next year could be severely dry—rather than bestowing water as always and then praying for rain.

And that brings me to what really needs to happen.

Governor Newsom needs to wake up to the reality of a dry California and direct his water board to finish its long-delayed Bay-Delta plan update. This policy revision would set aside water to protect irreplaceable public resources like our Bay, and our rivers and fish, while compelling both urban and agricultural water agencies to live within the water budget that nature provides. If the Governor doesn’t wake up soon, the state’s failure to plan for droughts will turn our dream of California living into a permanent nightmare.