Sejal Choksi-Chugh
From the October 2018 edition of Bay Crossings

San Francisco Bay’s water level is expected to rise over the coming decades. Even using the moderate estimates of three feet over the next eighty years, the resulting damage could resemble the recent hurricane-caused havoc on the East Coast. 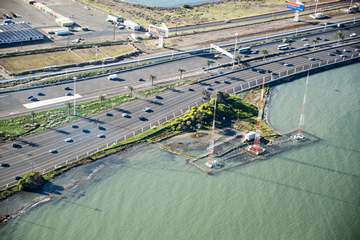 Scientists estimate the cost in the Bay Area of a major rainstorm plus a three foot rise in the Bay’s water at $70 billion, with losses to homes, businesses, and critical public infrastructure like roads and wastewater treatment plants. Flooding could reach more than 1,000 industrial sites around the Bay’s shoreline and release toxic pollutants from these contaminated lands into the Bay. Toxins in the water would harm wildlife, including millions of migratory birds, and make recreation on and in the Bay dangerous.

Impacts like these can be averted, but it will take bold action now. Baykeeper has some recommendations:

Wetlands, not seawalls. Wetlands are the Bay Area’s best defense against sea level rise. They soften waves, provide a buffer against flooding, filter pollutants from water, and stabilize shorelines. But wetlands need tidal action, with time above and below water each day. Wetlands won’t survive if rising seas submerge them continuously.

To preserve the Bay’s wetlands, Bay Area leaders need to make sure that no more are destroyed by development. Another fix is to halt excessive sand mining from the Bay floor. If too much sand isn’t removed, the Bay’s sand will naturally wash up on wetlands, and help raise them.

Dredging practices in the Bay also need to be modernized. Right now, clean mud and sediment is dredged up to keep shipping channels open, then dumped far out in the ocean. That clean sediment should instead be used to build up and restore Bay wetlands. And if there’s undeveloped land adjacent to wetlands, it should be protected from development. As tides rise onto the formerly dry land, wetland plants and animals can migrate uphill, if there’s room.

Preserving wetlands is a much better strategy than concrete seawalls. A higher, stronger seawall on one part of the shoreline can increase flooding elsewhere on the shoreline.

Coordinated region-wide planning. Most importantly, communities around the Bay Area cannot tackle sea level rise in a piecemeal way. The Bay Area needs coordinated regional planning that protects the ecosystem, economy, and communities. And a top priority is to regionally identify the more than 1,000 industrial sites along the shoreline that could release toxic pollution into the Bay when flooded. Coordinated, expedited cleanup of these sites, starting with the most dangerous sites first, will help prevent harmful pollution from getting into the Bay and hurting wildlife and people.

For more about how the Bay Area can meet the huge challenge of sea level rise in San Francisco Bay, visit Baykeeper’s new ShoreView website. ShoreView is a Google Impact Challenge Grant project. It includes Street View-style images of the Bay shoreline, plus maps of toxic industrial sites around the Bay and of shoreline areas at risk of being underwater.

Photo of Bay Bridge approach durng the year's highest tides by Robb Most.

FEDERAL JUDGE FINDS FOR ENVIRONMENTAL GROUPS IN SUIT AGAINST EPA
Baykeeper v. EPA: A big win for the Bay
At EPA headquarters, salt ponds aren’t water
King Tides Sound a Pollution Alarm in the Bay
Wetlands are key to the Bay’s future
ShoreView: Views of an Evolving Shoreline