If you’re a Bay Area voter, congratulations! Your vote has begun making a difference for San Francisco Bay. Two years ago, an overwhelming majority of Bay Area voters showed how much they love the Bay by passing Measure AA. The measure created new funding for the restoration of the Bay’s wetlands and shorelines.

Now, eight projects are being funded with this new support. The projects will restore thousands of acres of tidal marsh, improve wildlife habit, and increase shoreline trails and parks. 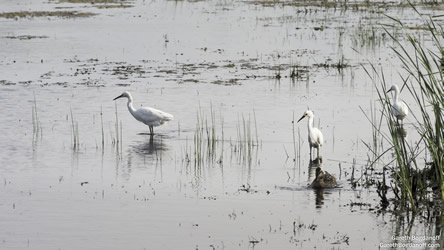 Wetlands provide natural flood protection and filtering of pollutants. But the Bay has lost most of its wetlands due to shoreline development and filling. The newly-funded projects will help reverse some of that damage.

In the South Bay, 620 acres of former salt ponds will be restored to tidal marsh, using methods that will help protect nearby shoreline communities from storm surges, flooding, and sea level rise.

In the North Bay, degraded shoreline will be turned back into wetland wildlife habitat in locations that include the San Pablo Bay National Wildlife Refuge, San Rafael’s Pickleweed Park, and Petaluma’s McNear’s Landing. Over several years, 5,000 teachers and students will help plant thousands of shrubs, grasses and other native plants.

In San Leandro, a severely disturbed shoreline area will be transformed into an innovative wetland that will not only provide wildlife habitat but will also reduce pollution from treated wastewater. Baykeeper helped develop the proposal for this “treatment wetland,” which could become a model for other Bay Area shoreline wastewater treatment plants.

At Encinal Beach in Alameda, debris will be cleared away and replaced with restored sand dune habitat, a new trail, and public water access.

Other projects are slated to restore wetlands and increase wildlife habitat along Sonoma Creek, in Suisun Marsh, at a Novato island, and on the San Jose shoreline. Additional funds will be allocated soon for restoration along San Francisco’s eastern shoreline.

The funding totals almost $18 million, and more rounds of projects will be funded in the coming 20 years. By showing how much we care about San Francisco Bay, you and the residents of the nine Bay Area counties are making our region’s most precious natural resource healthier—and more resilient to sea level rise.