The cleanup of the Ghost Fleet—57 decaying military ships that poisoned the San Francisco Bay ecosystem for 40 years—is now two years ahead of schedule, with only 13 ships left to be removed. Additionally, the worst ships have been removed first, so the ongoing pollution has already been significantly reduced.

In 2010, Baykeeper—along with two other environmental groups, ArcEcology and Natural Resources Defense Council—successfully reached a settlement agreement requiring the federal government to clean up all the ships by 2017. The rusting fleet had released more than 20 tons of lead, zinc, copper, cadmium, and other toxic substances into Suisun Bay, a northern inlet of San Francisco Bay.

Baykeeper Staff Attorney Andrea Kopecky, representatives from our partner organizations, and I recently performed a yearly onboard inspection of the Ghost Fleet. We found that 44 of the 57 ships have already been removed. Over the next year, the federal agency responsible for the cleanup, the Maritime Administration, is planning to solicit bids for the removal of six more vessels. The Maritime Administration has followed the recommendation of Baykeeper and our partner organizations that the most polluting ships be removed first.

The Ghost Fleet is a collection of long-defunct military ships from World War II and the Korean War, originally stored in Suisun Bay with the idea that they could be reactivated for wartime use. Suisun Bay, located in northern San Francisco Bay near the Sacramento-San Joaquin Delta, is critical habitat for several species of endangered fish, including Chinook salmon and Delta smelt. When Baykeeper and our partners brought suit in 2010, pollutants in the sediment directly below the vessels were found to be in concentrations that exceed California’s hazardous waste toxicity criteria. The levels were high enough for sediment-dwelling creatures to consume the toxins, which introduces them into the Bay’s food chain.

Now, the remaining 13 ships are much cleaner than during our first inspection four years ago, when rust covered the decks and paint chips crunched under our boots. All remaining ships are swept by hand every 90 days. Paint chips and debris are collected in barrels and disposed of at a hazardous waste facility. Effective pollution controls have also been installed on most of the ships, to minimize harm to the Bay until they can be removed. These pollution controls include: 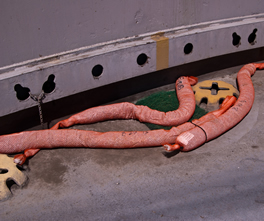 Despite these efforts to control pollution, Baykeeper and our partner organizations found serious problems with three of the ships. We recommended that one, the Wyman, be monitored more carefully and removed immediately, because its paint is deteriorating to the point that rain running off the ship could pollute the Bay with lead and other toxic metals. We are also concerned about a large amount of copper pollution from another ship, which the Maritime Administration plans to remove early in 2014. Paint is chipping from a third ship, and Maritime Administration staff agreed to evaluate options for controlling the problem and to consider removing it sooner than originally planned.

Compared to before Baykeeper took legal action, the Ghost Fleet now poses a much smaller threat to the Bay and local wildlife. Birds have even made the ships their home. During our inspection, we spotted a pair of osprey nesting atop a mast and a Great Horned Owl perched on a ship pipe.

See a 2008 video about the damage done to San Francisco Bay by the Ghost Fleet, made while Baykeeper and our partner organizations were taking legal action, which succeeded in 2010, for cleanup.