Cleanup of the Ghost Fleet is Ahead of Schedule 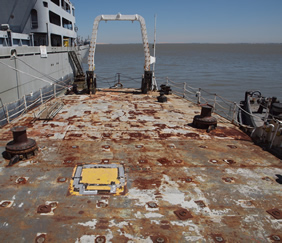 The Ghost Fleet—57 decaying military ships that poisoned the San Francisco Bay ecosystem for 40 years—is being cleaned up ahead of schedule.

In 2010, Baykeeper successfully reached a settlement agreement with the federal government that required a speedy cleanup of the rusting ships. The Ghost Fleet had released more than 20 tons of heavy metals such as lead, zinc, and cadmium into Suisun Bay, an inlet that connects San Francisco Bay with the Delta.

Baykeeper recently conducted our annual inspection of the ships to see how the cleanup is proceeding, along with representatives from the Regional Water Resources Control Board and one of our partners in the settlement, Natural Resources Defense Council. This is one of the few times non-military personnel are allowed on the ships. We spent five hours inspecting the ships and being briefed by officials from the Maritime Administration, the federal agency responsible for the cleanup.

We learned that 36 of the original 57 ships have already been removed. For the 21 ships that still remain in Suisun Bay, controlling the ongoing pollution is an important part of reducing contamination of the ecosystem. Fortunately, the Maritime Administration is doing an excellent job and has dramatically reduced pollution caused by rain washing toxic substances off the remaining ships.

Before the cleanup began, when I walked on the ship decks, I could hear the crunch of hazardous paint chips and rust under my feet. Those decks have been power-washed, and now it’s possible to walk them silently. The Maritime Administration is also effectively using pollution-controlling techniques that include filtration mats around drains, coatings to prevent rusting and flaking of paint, and encapsulating lower decks with plastic to prevent paint from flaking into the water. We pointed out a few areas where improvement in pollution control is still needed, especially on the ships that will remain in Suisun Bay for the longest time.

Most of the removed ships have been dismantled and recycled. Some have been dismantled locally at a former naval shipyard on Mare Island. Baykeeper and our other partner in the settlement, Arc Ecology, advocated for local dismantling so that the recycling process would be held to California’s environmental standards, rather than the ships being towed through the Pacific Ocean to places with less stringent controls.

One Ghost Fleet ship, the U.S.S. Kawishiwi, was under threat of being disposed of in an environmentally-harmful manner, but Baykeeper’s sister organization, Orange County Coastkeeper, stepped in to advocate for a better solution. The Maritime Administration planned to sink the Kawishiwi to create an artificial reef off Dana Point, California. The city had already approved the plan when Orange County Coastkeeper urged the city and the agency to reconsider, because sinking the ship would risk contamination of Orange County’s coastal ecosystem. 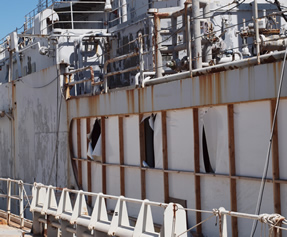 The Kawishiwi is contaminated with PCBs—toxic chemicals formerly used in electronics that persist in the environment and accumulate in the tissues of seals, sea lions, and other marine mammals that live on the Orange County coast. The ship is also contaminated with other toxic chemicals, heavy metals, and oil and fuel residues.

The Maritime Administration recently agreed not to sink the Kawishiwi. Instead, the agency will follow Orange County Coastkeeper’s recommendation to dismantle and recycle the ship. Moreover, the agency agreed to exclude all ships built before 1985 from use as artificial reefs in the future, because they are likely to contain PCBs. This is a major step forward in artificial reefing policy.

All 21 of the remaining Ghost Fleet ships must be removed by the end of 2017. San Francisco Baykeeper will continue inspecting the site yearly. We will evaluate the cleanup progress and ensure that ships are disposed of in ways that do not further harm San Francisco and Suisun Bays.