Take Action: Stop the Trump/Newsom Extinction Crisis in the Bay 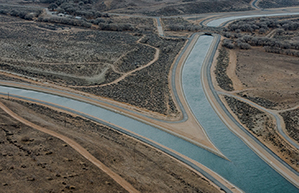 Governor Newsom is relying on bad science from the Trump era to justify giving water handouts to California’s industrial agriculture, at the expense of a healthy San Francisco Bay and the people who depend on it.

An entire ecosystem is unraveling bit by bit before our eyes.”

Water-intensive crops like almonds, walnuts, and pistachios get irrigated while toxic algae fills the Bay's tributaries and salmon die, putting Bay Area residents and our local fishing businesses in peril.

The State Water Board has developed a plan, based on actual science, that would require increased river flows into the Bay and require both industry and cities to use water sustainably. But Governor Newsom has actively blocked this science-based plan. Tell Governor Newsom to reject Trump-era “science” and say no to greed.

If we don't take action soon, San Francisco Bay will no longer support the fish and wildlife species that have lived here for thousands and thousands of years.

The cause of the crisis is clear, and so is the solution. Too much of the fresh water that once flowed from rivers in the Sierra Nevada to the Delta and Bay is being diverted, mostly for industrial agriculture.

Up to ninety percent of the flow in some rivers is diverted for human use—and nearly all of that goes to agriculture. By giving all of this water to corporate agricultural interests, we drain our reservoirs of cold water that salmon and other fish need to survive during the hot summer months. This summer and fall, nearly all of the Chinook salmon that spawn below Sierra dams will be killed by lethally hot water.

Our native fish need cold, flowing rivers to survive. And many other creatures need fish to survive. As fisheries crumble, it sets off a domino effect throughout the food web, starving everything from orcas to ospreys.

People are also affected. California’s fleets of small fishing boats, which rely on Chinook salmon from the Bay’s watershed, are flailing. Indigenous people are being deprived of both an important food source as well as their cultural heritage. So much water is being diverted from our rivers that they’ve become stagnant, which makes them the perfect breeding ground for toxic algae that make people sick and can kill pets that enter the water.

For years, Governor Newsom and many other politicians have tried to negotiate a compromise with Big Ag. But environmental organizations, fishing representatives, and tribes have been excluded from those talks—and the latest proposed deals don’t do nearly enough to protect our rivers, our fish, or our communities.  San Francisco Bay needs a plan to protect the quantity and quality of water it receives from its watershed—and that plan must be based on science, not the demands of powerful water districts.

There’s already a plan to stop the looming catastrophe, if only the governor chose to put it in motion. The State Water Board’s Bay-Delta Plan would set guidelines to prevent the ecosystem from spiraling into collapse. It would also set aside more water to maintain our rivers and fish, while forcing our cities and agricultural operators to use water more efficiently.

California’s corporate agribusiness  industry adamantly opposes  anything that would limit its ability to plant more and more nut trees The Water Board’s Plan has been repeatedly postponed due to pressure from Big Ag’s lobbyists.

After a decade of failed negotiations with corporate agribusiness, we need to put our rivers and communities first. The State Water Board can avert a crisis in San Francisco Bay—in fact, it is legally required to do so.

Tell Governor Newsom to insist that the State Water Board move forward with the Bay-Delta Plan to safeguard our rivers once and for all.

Please join us by signing the letter below to ask the governor to direct the Water Board to complete its Bay-Delta plan now, for the health of the Delta, the Bay, and everyone who depends on them.