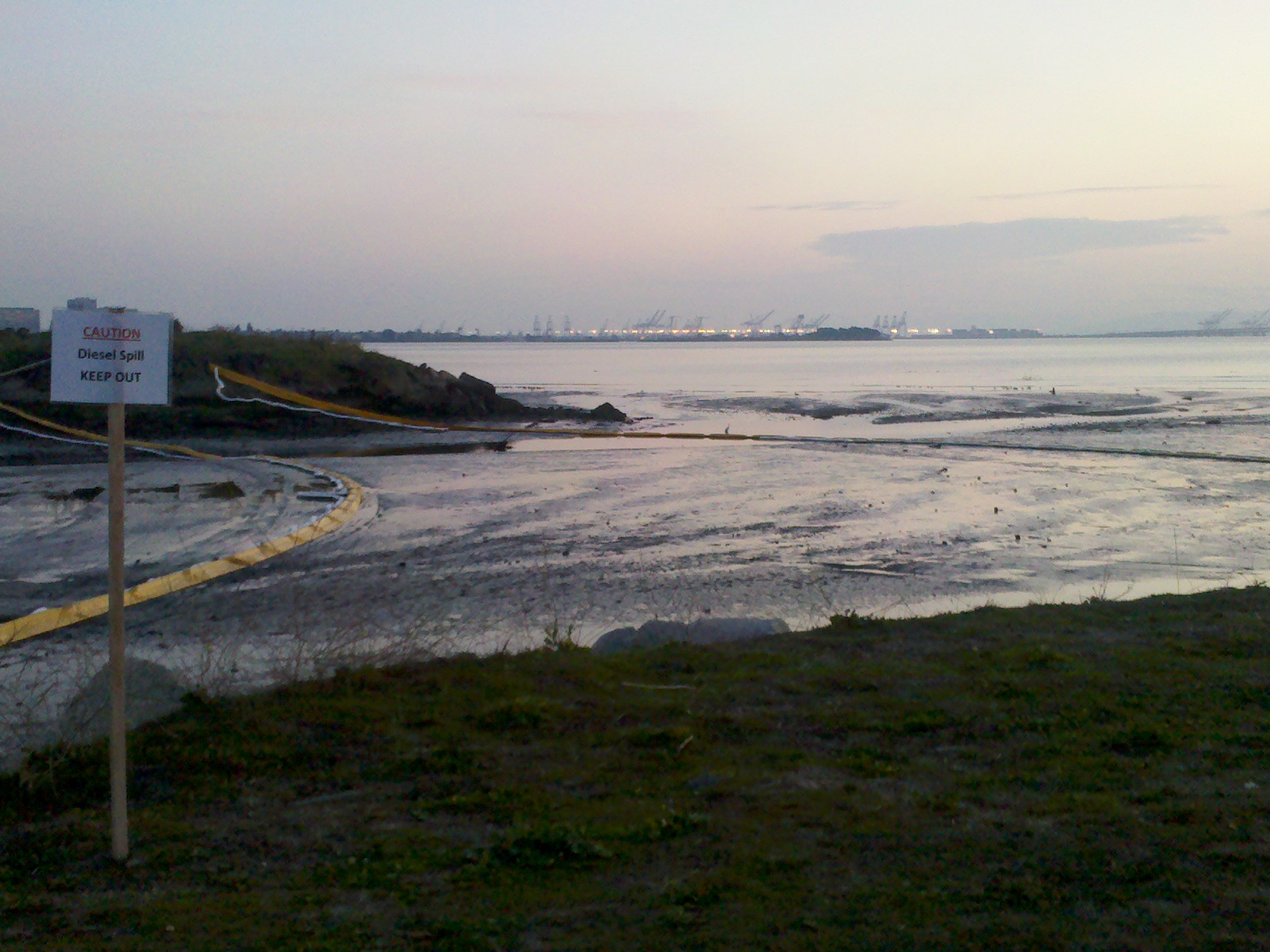 On Sunday, December 11, a WWII-era tugboat with as much as 52,000 gallons of fuel oil on board sank into Richmond's Inner Harbor. Oil was soon observed leaking into surrounding waters.

The day prior, approximately 1,290 gallons of diesel fuel escaped from UC Berkeley's Stanley Hall into the storm drain system leading to Strawberry Creek, which drains into San Francisco Bay near Berkeley Marina.

In Richmond, Baykeeper Executive Director Deb Self observed clean-up activities at the sunken tug, where the Coast Guard and the state Office of Spill Prevention and Response (OSPR) quickly established oil containment operations. “The tug is not very stable because there's no engine on board and the fuel is essentially acting as ballast. The Coast Guard and OSPR are doing a good job stepping back to think about next steps and risks of different approaches,” said Self.

Details and photos of the operation are available at OSPR's Cal Spill Watch site, which show the Tiger, a WWII-era tugboat, sunk inside a former drydock, which allowed for rapid containment of the boat and polluted waters within three layers of boom.

The Coast Guard reported overseeing the deployment of boom around Brook's Island, a 373-acre preserve south of the leaking tug. The response follows OSPR's implementation of a new sensitive site protection strategy for Brooks Island in coordination with staff from East Bay Regional Parks – an agency very engaged in oil spill planning since the 2007 Cosco Busan spill.

Self observed boom stretched in front of the east side of the island’s sandy spit. An on-site field biologist indicated the booming strategy was done in consultation with park staff, although no birds were observed at the time, so the booms represented a preliminary precaution.

An Incident Command structure has been established from an on-site OSPR trailer, in order to contain and remove as much oil as possible. Preliminary reports indicate the twin tug boats are owned by a person located in Greece, who has not yet been reachable. In the absence of the owner, federal funds have been made available to cover the clean-up costs.

The Richmond oil spill will take time to resolve, and Baykeeper will continue to provide updates.

The fuel leaking into Richmond’s inner harbor is intermediate grade fuel oil, which floats and can be skimmed from the water. The diesel fuel spilling into the Bay from Strawberry Creek, by contrast, does not float and is more difficult to clean up.

The diesel spill resulted from a leak in an emergency generator located in the basement of UC Berkeley’s Stanley Hall. UC Berkeley reported efforts were undertaken to contain and vacuum the fuel from Strawberry Creek, while berms were established at the mouth of the creek to limit the discharge of diesel into the Bay. The California EPA is the lead agency dealing with spill, with the Coast Guard helping out as needed.

OSPR has had staff working along the creek since the spill occurred. According to a December 11 Contra Costa Times article, officials from the OSPR suggested that impacts were minimal and only traces of diesel odors were noticeable.

However, Baykeeper staff members who visited the mouth of Strawberry Creek on Thursday found that diesel fuel has definitely contaminated mudflats where shorebirds feed. In addition, the smell of diesel was undeniable at the outfall.