Scooter Company Agrees to Address Dumping in the Bay

Last month, Baykeeper’s pollution hotline received a tip that two Lime scooters had been dumped in San Francisco Bay and left to decay. After several days of waiting in vain for the company to remove the scooters, the tipster pulled one from out of the Bay near San Francisco’s Embarcadero Street with a grappling hook.

That same week, Baykeeper staff found and removed a discarded Lime bike in Lake Merritt, a tributary to the Bay. Upon further investigation, we discovered that a number of other app-based scooters and bikes for hire have been dumped in local waterways, and the companies were not doing enough to address the problem.

So Baykeeper stepped in. We recently worked with Lime, one of the largest bike and scooter sharing companies in the Bay Area, to improve their response to bikes and scooters being tossed in the Bay.

“We decided we needed to take action to ensure the Bay isn’t treated like a garbage can,” says Baykeeper Executive Director Sejal Choksi-Chugh. “It’s Baykeeper’s role to hold companies accountable for cleanup when their pollution ends up in San Francisco Bay.”

Lime was responsive to Baykeeper’s concerns. After we discussed the pollution issues and possible solutions, they agreed to adjust their Bay Area operations to retrieve all scooters and bikes in the Bay (or other local waterways) within 24 hours of receiving a report of a dumped device.

That’s a good first step. We’re now advocating for the company to develop an automated alert system if one of their devices is submerged in water and to issue a public statement to discourage Bay dumping.

As a member of the international Waterkeeper Alliance, we’re also uniquely positioned to work with our sister Waterkeeper organizations across the globe to share solutions to address scooters and bikes for hire that end up in waterways.

Baykeeper will continue to monitor the situation to make sure scooters and other waste are not contaminating San Francisco Bay.

If you see a scooter or bike for hire that’s been dumped in a local waterway, please report it immediately to its parent company. If they do not respond in a timely manner, contact Baykeeper’s pollution hotline. 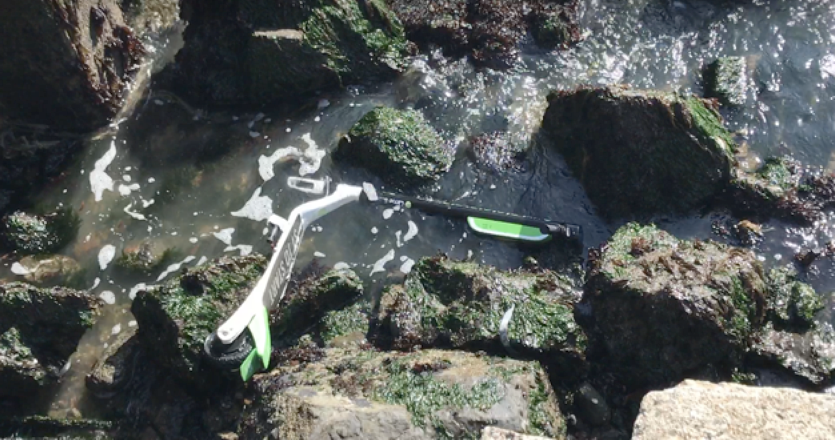 Above: a photo from a pollution hotline report about dumped scooters in the Bay.