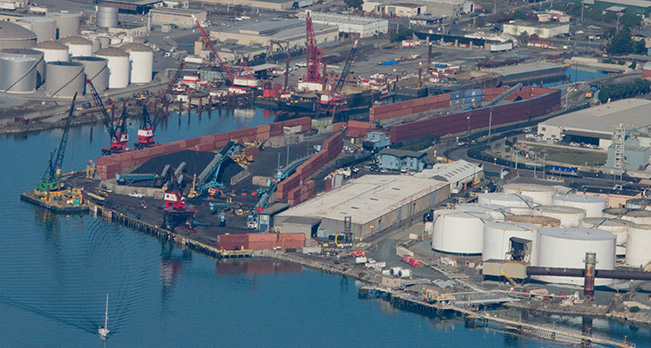 In a bold move, the City of Richmond voted to ban coal storage and handling. This is a huge step forward in the fight to protect local residents and stop dirty coal pollution in San Francisco Bay.

Coal is extremely toxic—both for people and wildlife. It contains arsenic, mercury, and other harmful contaminants, and is a major driver of global climate change when burned for fuel.

The Bay Area’s main source of coal pollution is located in Richmond: the Levin Terminal, the region’s only active coal exporter.

Levin currently handles more than a million tons of coal at its shoreline facility (pictured, above) every year, releasing toxic dust that coats surrounding neighborhoods and blows into the Bay.

That’s why Baykeeper has been working for nearly a decade to stop pollution from the Levin Terminal. Our legal win in 2012 stopped water pollution from the site. And for the last year, we’ve worked alongside local community partners to help the city of Richmond craft an ordinance to phase out the storage and handling of coal.

Baykeeper attorneys vetted the drafts, educated council members on the impacts of dirty coal on the Bay, and advocated through letters and public testimony at the hearings.

After months of debate, the City Council finally made the right call. They voted to pass the ordinance at a lively, long-lasting meeting on January 14.

This action wasn’t easy, and it took a lot of courage. The oil and coal industries tried to intimidate the city into abandoning the ordinance, for the sake of maintaining their profitable access to a dirty facility. In addition, Levin claimed that coal exports are needed to keep the facility financially viable, putting profits over the community’s health.

But the terminal has been shipping other materials for decades, including iron ore and recyclable materials. Levin doesn’t have to sicken its neighbors and the Bay to stay in business.

The City of Richmond has taken a stand to protect its citizens and San Francisco Bay in the face of enormous pressure from fossil fuel interests. This is truly a historic step in defending public health and the Bay from toxic coal pollution.

Photo of coal piles at the Levin Terminal by Baykeeper, thanks to LightHawk

The Courage to Ban Coal