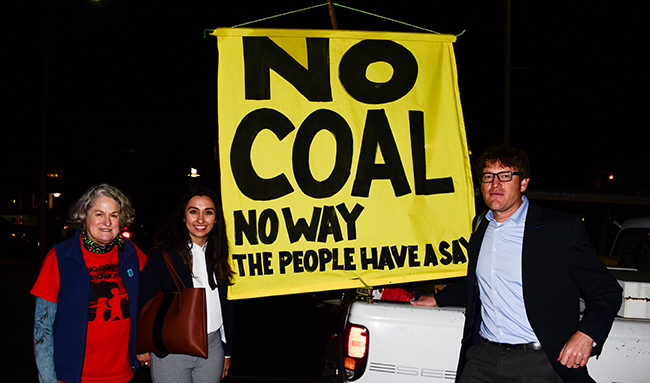 The Bay Area’s only active coal terminal moves more than a million tons of coal through Richmond every year, releasing toxic coal dust into nearby neighborhoods and San Francisco Bay.

Coal dust causes asthma and other diseases in people, and it contains metals and other pollutants that harm wildlife.

That’s why Richmond city officials have proposed a new zoning ordinance that would phase out the handling and storage of coal in the city—a critical measure for protecting the health of the Bay and local residents.

It’s also an important step to address the global climate crisis on a local level, by removing the Bay Area as a hub for the coal industry’s dirty business of polluting exports.

At the vote on December 3, fossil fuel companies fought back hard.

Representatives of the Levin coal terminal claimed that the new ordinance would put the company out of business. But from Baykeeper’s past successful litigation to stop water pollution from the site, we know that the terminal only recently increased its coal exports over the last three years. Levin hasn’t always been a coal terminal, and it has the option to export other materials, like bulk commodities or recyclables.

Meanwhile, the oil industry came out against the new ordinance in cahoots with the pro-coal lobbyists because of the additional restrictions on petroleum coke. Petcoke, for short, is a toxic coal-like byproduct of oil refining that’s also shipped through the Levin facility. Oil refineries could send their petcoke to a cleaner, enclosed facility in Pittsburg, but the industry wants to maintain its cheaper, dirtier export option in Richmond.

At the Richmond City Council meeting, things got ugly. Our advocates were shocked to hear opponents use rude and racist language for the indigenous activists and environmentalists there to support the ordinance.

Baykeeper Staff Attorney Ben Eichenberg spoke before council members just before midnight, urging them to take action for the health of the Bay and local residents.

But after hours of debate and over 100 comments from the public, the council decided to postpone the vote—seemingly in response to threats of retaliatory industry litigation.

"This delay only serves the short-term interests of the coal industry. There won't be a better or more convenient time to start phasing out coal," said Ben. "Calling for more unnecessary study is nothing more than rearranging deck chairs on the Titanic. The mayor and city council need to act now to protect the Bay and residents’ health."

In a bold move, the City of Richmond voted to ban coal storage and handling. This is a huge step forward in the fight to protect local residents and stop dirty coal pollution in San Francisco Bay....
January 15, 2020
Join us to hold polluters accountable and defend the Bay DONATE NOW >