Raw Sewage in the Bay is Not Okay 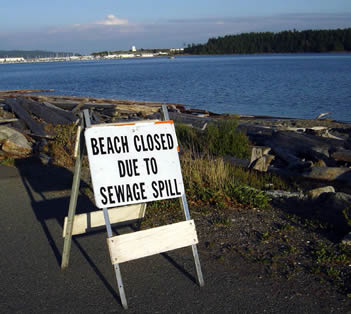 The rainy season brings a big problem for San Francisco Bay: sewage spills. Aging sewer pipes around the Bay Area are crumbling. And many cities have been ignoring the problem for decades. Large volumes of rain seep into these pipes, causing overflows that spill into streets, and the sewage then gets washed into the Bay.

“When raw sewage spills into our streets and creeks, it exposes people to bacterial infections and illnesses,” says Ian Wren, Baykeeper Scientist. “Untreated sewage also hosts a brew of contaminants that can kill fish in urban creeks, lower dissolved oxygen in the Bay, and prevent people from enjoying local waterways.”

A decade ago, the city of Millbrae’s sewer agency spilled tens of thousands of gallons of raw sewage into the Bay. Baykeeper’s scientists discovered that the city’s own reporting showed a majority of these sewage spills reaching the Bay and local creeks.

“The law requires sewer systems to be maintained,” says Erica Maharg, Managing Attorney. “When cities fail to meet the best practices standard set by the law, and the resulting pollution harms people and wildlife, it’s unacceptable.”

Baykeeper filed a Clean Water Act lawsuit in 2010 to require Millbrae to fix its sewer problems. Among the improvements, the city agreed to clean pipes more frequently to prevent blockages, increase storage capacity, and provide money for home owners to replace broken private sewer lines. And then as our legal agreement was set to expire, Millbrae volunteered to scale up their efforts by replacing pipes that were especially prone to spills.

Too little (but not too late) for the Petaluma River

Updated: On March 17, 2020, Baykeeper further challenged the Regional Board's flawed plan before the oversight agency, urging the State Water Board to reject the plan as inadequate. Baykeeper's...
April 11, 2020

Full of it: Keeping Horse Manure out of the Petaluma

One of the largest horse boarding facilities in the country lies on the banks of the Petaluma River (pictured, above). For years, there's been nothing to stop the horse manure from flowing straight...
February 14, 2020
Join us to hold polluters accountable and defend the Bay DONATE NOW >