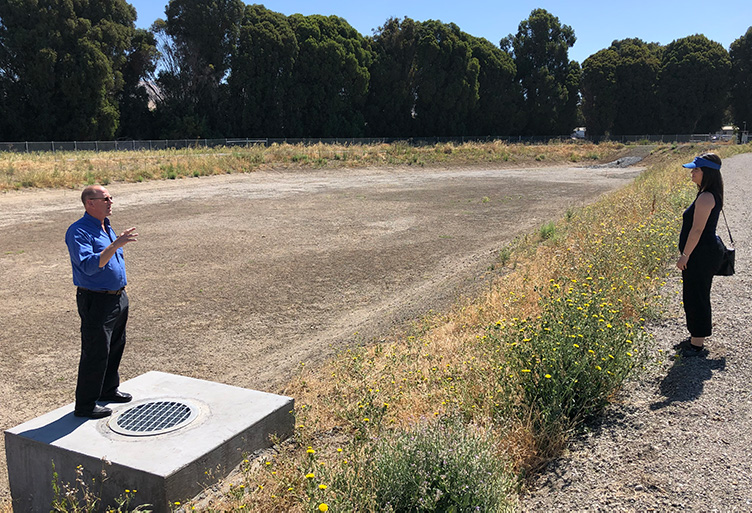 Can heavy industry coexist with a healthy San Francisco Bay? Yes, but only if companies use exceptional pollution controls.

When Baykeeper first investigated U.S. Pipe and Foundry, a steel pipe manufacturer in Union City, we found that polluted water was running off its 70-acre facility with few pollution controls. During heavy rains, runoff from the site often contained high levels of aluminum, lead, other heavy metals, oil, and grease.

The contaminated water ran into Ward Creek, a tributary of Alameda Creek, which empties into San Francisco Bay. That means the pollutants were reaching the Bay and harming fish and other wildlife.

Baykeeper’s legal and science team identified the facility’s pollution issues, investigated its operations, and then held the company accountable under the Clean Water Act. Through litigation, we reached an agreement with the company requiring them to clean up their pollution.

Our legal agreement required U.S. Pipe to install a specialized pond, among other pollution controls.  This retention pond is designed to collect water from the site, and it’s big enough to hold the amount of water that falls onsite during most normal storms.

U.S. Pipe will re-use some of the pond water in its operations. Some pond water will evaporate. And the pond also has pollution-reducing features. Water sinks into the ground beneath the pond, naturally filtering pollutants out.  The area will also be landscaped with plants that can filter out pollutants.

The photo above shows Baykeeper Staff Attorney Nicole Sasaki (right) giving the new retention pond a final inspection before the rainy season begins to fill it up.

The efforts to reduce pollution at U.S. Pipe and Foundry are part of Baykeeper's Bay-Safe Industry Campaign. Since 2011, Baykeeper has stopped illegal toxic contamination from 45 of the Bay Area's worst industrial polluters of San Francisco Bay.

Polluters don’t like getting caught. They get defensive—even when our field team catches them red-handed with photos and water sampling results demonstrating serious pollution violations. After we...
September 10, 2021
Join us to hold polluters accountable and defend the Bay DONATE NOW >