Currently, oil spill cleanup technology is designed to deal with spills of conventional oil that floats on the surface of water and slowly disperses and evaporates. But heavier oils, like tar sands sink, making the substance nearly impossible to remove from an aquatic ecosystem.

Oil companies are not required to prepare for dealing with such a unique spill. SB 709 would fill this regulatory gap, requiring operators transporting heavy, non-floating oils on or near California waterways to prepare a contingency plan specifically related to non-floating oils and identify a qualified company capable of assisting clean-up efforts in the event of a spill.

Currently, approximately 8 million barrels of tar sands oil are transported from Canada to refineries in California every year, about 1% of the total oil imported. However, tar sands shipments are expected to increase substantially over the next ten years, as new pipelines are fast-tracked under this federal administration and open up Canadian tar sands production to West Coast ports.

Baykeeper has worked with state and local agencies to improve oil spill planning and prevention measures in the Bay for many years. San Francisco Bay has experienced a number of conventional oil spills, such as the Cosco Busan spill of 2007 that released 53,000 gallons of crude oil into the Bay. The spill forced the closure of more than 50 public beaches, killed thousands of birds, and contaminated local fisheries.

A tar sands oil spill would be even more damaging, and could irreversibly damage the Bay’s wildlife and ecosystem. A fully laden tar sands tanker carries more than 250 times as much oil as the amount spilled by the Cosco Busan—and clean-up efforts would last for years rather than weeks. A 2010 tar sands spill in the Kalamazoo River in Michigan from a ruptured pipeline devastated the river’s ecosystem. Kalamazoo River clean-up efforts lasted for five years, and the ecosystem has not yet fully recovered. For all of these reasons, Baykeeper has identified tar sands oil spills as a significant threat to the health of San Francisco Bay. 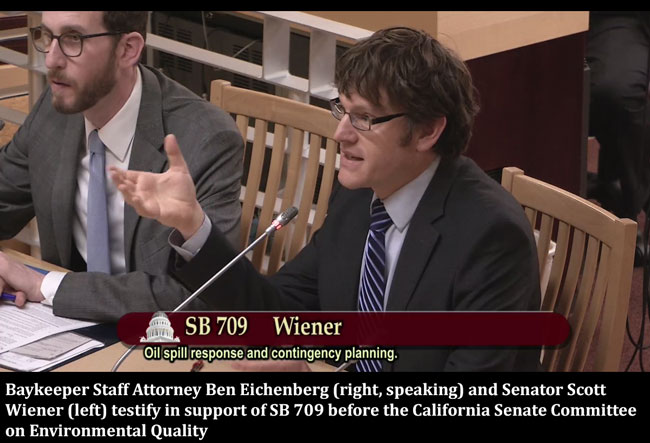 Most available oil spill cleanup technology works by skimming fuel resting on the surface of a waterway. Containment booms, the most commonly used oil cleanup device, float on water and extend down about two feet. Absorbent materials also sit on the water’s surface.  If deployed in the first hours of an oil spill, these tools can effectively remove conventional oil from waterways—but they do not work for heavier oils like tar sands, which sink below the water’s surface, damaging aquatic ecosystems along the benthic floor.

“An increase in tar sands oil being transported to Bay Area refineries could result in a catastrophic spill,” says Baykeeper Staff Attorney Ben Eichenberg. “We want to be assured that there’s a plan in place to clean up a mess before the Bay becomes a test case for unproven methods and technology.”

Baykeeper is partnering on this new legislation with State Senator Scott Wiener, who introduced the bill in March.  “California’s bays, rivers, and coastline are some of the most stunning and important natural resources in the world, and we need to be vigilant in safeguarding them from destructive oil spills,” says Senator Wiener. “This bill creates a clear and necessary requirement that if you want to bring tar sands oils anywhere near our waterways, you better have a real plan to clean up after yourselves.”

Baykeeper and Senator Wiener testified in support of SB 709 before the California Senate Committee on Environmental Quality in April, along with our strong advisory partners at the Natural Resources Defense Council. We were joined in support of the bill by representatives from many other local non-profits, businesses, and government partners. The bill passed the committee vote, and is now headed to the Senate Appropriations Committee.