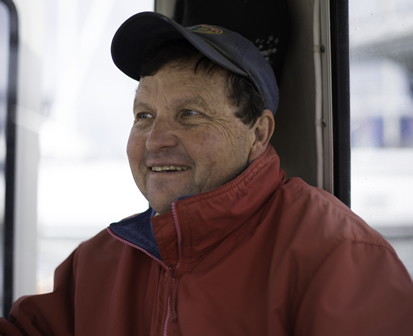 Did you ever wonder where Clipper Cove on Treasure Island got its name? Or how to identify San Francisco’s leaning skyscraper? Or where to find harbor seals in San Francisco Bay?

“I spend a lot of time on the Bay,” he says. “I’m interested in what I’m looking at, and it’s great to find out what it’s all about.”

Robert has volunteered as a Baykeeper Skipper, piloting our boat on pollution patrols, for over 10 years. He plans to keep up traditions started by Geoff Potter, who recently stepped down after 22 years of service as Baykeeper’s Head Skipper, and remains on our volunteer skipper roster. Like Geoff, Robert will continue at the helm, and, he says, “I’ll maintain the Baykeeper boat and be a good steward of the boat.”

Robert brings a lot of experience to his Head Skipper role. He’s been handling boats since his high school days in Florida aboard his parents’ motorboat. These days, he’s often on San Francisco Bay, racing with a crew of seven in a sailboat he co-owns.

When Robert retired from a career as an airplane engineer, he sought out Baykeeper because he was “looking for opportunities to volunteer with people who do good work for the Bay. I care about what I enjoy, and I want to see it preserved and improved.”

San Francisco Bay, Robert says, is “one of the prettiest harbors on the planet. And coming from Florida, where it’s all private property, I really appreciate the Bay’s public access. There are so many parks and so much public shoreline¾including Angel Island, an entire island open to the public.”

For the record, here are Robert’s answers to the questions above: Clipper Cove is named for the Pan American Clippers, a fleet of luxury floating airplanes that took off and landed in the cove’s waters from 1939 to 1941. San Francisco’s tilted skyscraper, the Millennium Tower, has a distinctive triangular top, shown in the photo below. And harbor seals often hang out on a small Yerba Buena Island beach facing the San Francisco skyline. 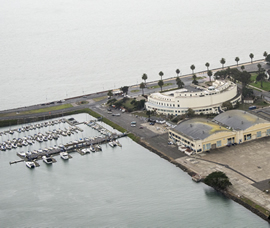 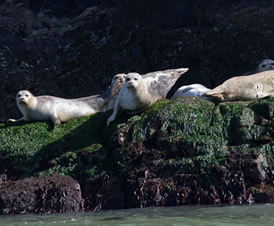 One less thing to worry about
The Best Lesson Ever
Embracing the Spirit of Earth Day while Sheltering in Place
A Beautiful Day in the Neighborhood
Why Do Seagulls Live on the Sea?
COVID-19: OUR PRECIOUS BAY NEEDS YOUR PROTECTION NOW MORE THAN EVER ...