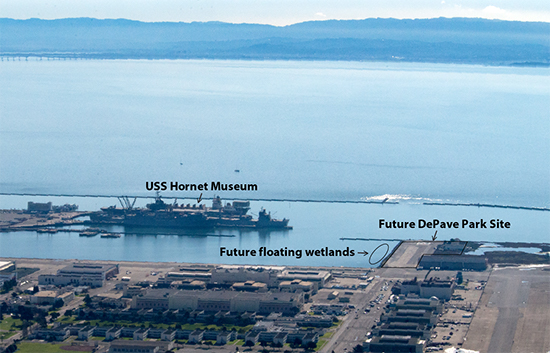 Future sea level rise poses a major threat to Alameda, a low-lying island in San Francisco Bay. Alameda’s shoreline neighborhoods will face a high risk of flooding, and rising tides could wash pollution into the Bay from contaminated shoreline sites.

That’s why Baykeeper advocated for the Alameda Recreation and Parks Commission to prioritize a proposal to remove pavement from a portion of the city’s shoreline—a project aptly named DePave Park.

To create DePave Park, 16 acres of land at Alameda Point will be converted into a newly constructed wetland and shoreline park. These adaptation steps will protect the city’s shoreline, provide new wildlife habitat, and help fight climate change.

Plans for this effort have been in limbo for years. But Alameda recently adopted a Climate Action and Resiliency Plan that features DePave Park. The City Council will consider moving forward with implementation of the new park and find funding at a future meeting.

Local residents strongly favored the project and turned to Baykeeper for support. And getting our support was easy—creating new wetlands is one of the best actions a community can take to defend its shoreline and the Bay from sea level rise.

These future wetlands will:

“DePave Park is a great example of how local cities can make decisions to help prepare for the impacts of climate change,” said Cole Burchiel, Baykeeper Field Investigator and Science Associate. “Prioritizing wetlands over pavement is a victory for both Alameda and San Francisco Bay.”

VOTE NOV 3! Our wildlife needs someone who will stand up to polluters & Big Ag.
New Shoreline Development Under the Shadow of Chevron
Sharks of San Francisco Bay
A Zombie Sighting in SF Bay
Ensuring Endangered Species Habitat is Safe From Sea Level Rise
Good News and Possible Bad News for the Bay