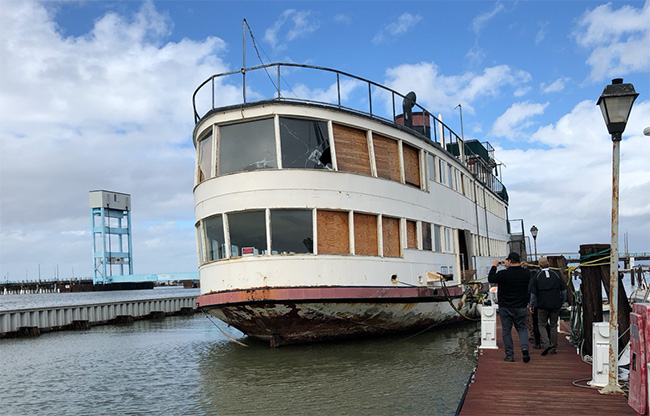 The nightmare began several years ago with a dream of turning a 95-year-old former war vessel into a floating luxury restaurant.

But the dream was never realized. The owner abandoned the boat, the Sherman, in 2017 and left it to rot at Vallejo’s municipal dock—leaving the city stuck with a mess.

An Army steamer in the 1920s, the Sherman later served as a Bay ferry, a vehicle for one prisoner to escape from Alcatraz in 1945, and the site of multiple attempts to create an on-the-water restaurant.

By the time the vessel ended up in Vallejo, it was dilapidated, stuck in the mud, and blocking the harbor entrance. The oversized boat began damaging the dock as well.

The Sherman is just one example of a Bay-wide problem. People buy boats they can’t afford to maintain or repair, then abandon them, and the boats gradually fall apart and pollute the Bay.

Two years ago, the Vallejo city attorney's office approached Baykeeper for help in their litigation to remove the Sherman. Our staff scientist, Ian Wren, provided an expert report assessing the threat posed by the ferry to support the city’s bid to gain ownership.

And it was successful. As a result of the city and Baykeeper’s efforts, the Sherman is no longer a threat to the environment or to the harbor dock in Vallejo.

Although the city won the battle, the delinquent owner failed to pay the court-ordered fines. That left Vallejo to pony up $500,000 to move the vessel to the Mare Island Dry Dock, to be dismantled under pollution-controlled conditions.

Unfortunately, the Sherman is just one example of a much larger problem. Many areas of the Bay have become de facto junkyards polluted by abandoned boats. And in the rare cases when state or local agencies have the authority to remove these vessels, taxpayers are often forced to foot costly bills.

That's why Baykeeper is collaborating with state and local agencies to craft statewide solutions to stop the problem of abandoned boats. There's still a long way to go before the Bay is free of all of these polluting nightmares. But Baykeeper is determined to end this widespread source of pollution in the Bay.

Photo of the Sherman courtesy of the City of Vallejo

Every year on Earth Day, I feel torn. I either despair about how much we need to do to maintain our planet's health, and then lament that public attention on just one day isn’t going to solve the...
April 19, 2022