The Bay's Not a Long-Term Parking Lot

The pandemic has shut down the global demand for fossil fuels. That means Bay Area refineries can't process all the crude oil that’s already loaded on tankers and coming our way. It's estimated that the oil tankers currently along the West Coast are carrying enough crude oil to meet as much as 20 percent of the world's daily demand.

That's a lot of oil! And it’s potentially troubling news for San Francisco Bay. The five oil refineries along the Bay have slowed production or shut down outright. They're not fouling our local environment with toxic fumes or wastewater as much as usual, but the waiting tankers are now serving as floating storage. And some of them are parking here in the Bay.

Oil tankers pose the greatest danger to the Bay and the safety of Bay Area residents when they're in motion, or when bad weather strikes. But even so, we don't want the Bay to become a parking lot for surplus oil. 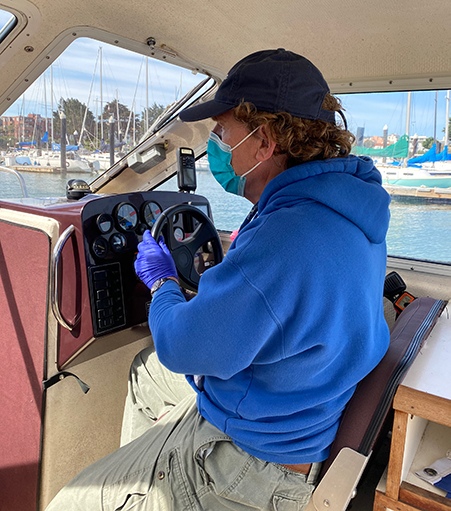 Angeles, now parked up near capacity, which caps docking at ten days.

Baykeeper is a member of the Bay's Harbor Safety Committee and has met with the Coast Guard—virtually, of course—to understand current plans to minimize the number of tankers in the Bay and reduce the risk of spills.

The tankers remain subject to the Bay's strict safety guidelines, and they're being carefully guided by San Francisco Bay Bar Pilots, so things appear to be under control at the moment. However, the Coast Guard is monitoring the number of tankers on the Bay, and has the authority to move vessels to prevent overcrowding and make sure navigation is safe. Baykeeper skippers are supporting this effort by keeping an additional pair of eyes on the tankers during our regular patrols.

These are uncertain times and conditions can change overnight—especially if conventional oil storage runs out and Big Oil starts looking for risky alternatives. The Bay can never afford an oil spill, but combined with the effects of the COVID crisis, a spill now would be especially tragic for the health of the Bay and Bay Area communities. And with Trump promising yet another industry bailout at taxpayer expense, Big Oil has nothing to lose. That's why Baykeeper is closely monitoring the situation, keeping tabs on the agencies, and making sure that everyone is prepared to prevent an oil spill in the Bay.

The traditional holiday season of thanks is taking on new flavor as I reflect on what Baykeeper has accomplished over this past year. There’s so much to be grateful for. We made it through the worst...
November 23, 2021
Join us to hold polluters accountable and defend the Bay DONATE NOW >