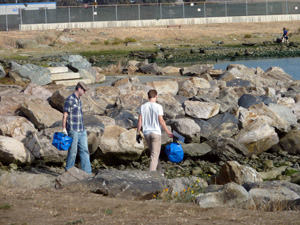 This past Saturday, more than 20 Baykeeper volunteers participated in California's annual Coastal Cleanup Day at India Basin Shoreline Park. Volunteers cleaned up more than 500 pounds of trash from the park, ranging from large items including a television, to tiny fragments of plastic and glass. As usual, food wrappers and cigarette butts made up a large percentage of the total trash collected. 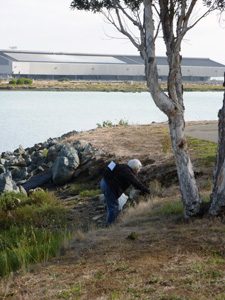 Baykeeper has cleaned up India Basin Shoreline Park for Coastal Cleanup Day since 2008. Due to our efforts and the work of local neighborhood volunteers, we've seen a steady reduction in the amount of trash accumulating in the park over the past four years. Roadside areas, however, continue to be plagued with debris from nearby fast food restaurants.

Located on the city's eastern shoreline in the Bayview-Hunter's Point neighborhood, India Basin and other nearby shorelines collect a disproportionate amount of San Francisco's trash and marine debris, as compared to western and northern shorelines.

As much as 80 percent of the debris on our shorelines originates from inland sources, traveling through storm drains and creeks out to Bay shorelines and ocean beaches. 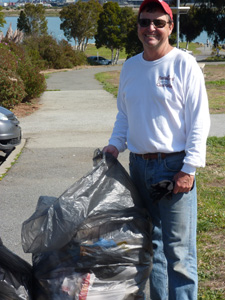 Baykeeper would like to thank REI and Teva for their support of our annual cleanup. And thank you to our wonderful supporters who volunteered their time to clean up the shoreline and keep trash out of the Bay – your efforts are helping to create a healthier San Francisco Bay!

Coastal Cleanup Day 2020: 50 Cleanups for the Bay
Confirmed
Giving Tuesday: How to use Facebook to support Baykeeper
Celebrate the Bay on the Water—in the Bay Parade!
Bay Parade 2020
The Golden Rivet Swim