Can 10 million tons of Utah coal per year be brought by train through the Bay Area and shipped from Oakland to Asia, without polluting neighborhoods and San Francisco Bay? The developers of a bulk shipping terminal in Oakland claim it can be done, in an opinion piece on the pages of the April issue of Bay Crossings newspaper. On the same pages, Baykeeper refutes the developer’s claims, explaining how much harm coal export from Oakland would create for San Francisco Bay, the Bay Area, and the global climate. 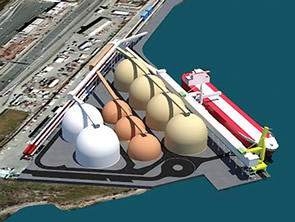 The developers of the bulk shipping terminal proposed for Oakland, Terminal Logistics Solutions, claim that they will prevent coal pollution. Their representative, W.G. Claytor, writes, “The Oakland terminal would hold the coal in encapsulated domes after arriving in covered freight cars, and then moving through fully enclosed conveyers out to covered ships.” There’s a picture of the covered freight cars and domes that would supposedly hold coal.

But when coal gets overheated, it can explode. That’s why it has always been shipped in open cars. If the covered cars have enough ventilation to prevent explosions, coal dust and small pieces of coal will still leak out. Simply put, the technology to safely ship coal in covered cars across the county hasn’t been demonstrated. 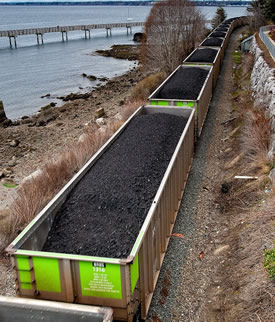 That means coal exported from Oakland would in fact be shipped in open rail cars on tracks that run near the San Francisco Bay shoreline, and through cities that include Richmond, Berkeley, Emeryville, and Oakland. All along the way, the trains would shed toxic dust and pieces of coal. Coal contains arsenic, lead, mercury, chromium, and other toxic heavy metals. Coal pollution threatens public health, by increasing conditions that include asthma in kids and bronchitis in adults.

The process of getting the coal from the train cars and onto ships for export also threatens the Bay with pollution. If the “encapsulated domes” and “enclosed conveyors” are too tightly enclosed, there’s a risk of explosions—right on the Bay shoreline. If they are ventilated, toxic dust could be blown into the Bay. Coal pollution in the watershed causes reproductive harm to fish, among other problems.

Another claim the shipping terminal developer makes is that the Utah coal that would be shipped through the Bay Area is “clean coal,” and that burning “clean coal” would reduce global climate change. But “clean coal” is a dirty lie. All coal contains toxic substances, and burning it generates large amounts of gases that cause global climate change. Plus, the trains that bring coal to the Bay Area would also burn fuel that produces pollution and gases that contribute to climate change, and so would the ships that take it away.

As Governor Jerry Brown stated last summer, in order to avoid the worst effects of global climate change, “over 90 percent” of the world’s known coal “can never be taken out of the ground.” If California is serious about its commitment to reducing greenhouse gas pollution, the only thing we should be exporting from Oakland is our clean energy technology.

Read the full opinion piece in support of coal export from Oakland by the developer of the propsed coal terminal, Terminal Logistics Solutions, in the April issue of Bay Crossings.