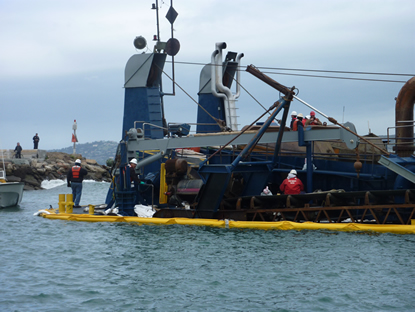 Feb 16 Update: The barge has been safely moved from where it ran aground yesterday off Marina Green. Check out yesterday's news coverage of Baykeeper on the scene:

Update: The sheen on the water around the barge is reportedly a small amount of engine oil, and the barge's fuel tanks were not damaged. Booms are in place around the barge. Baykeeper spoke with local officials to confirm that measures are being taken to protect sensitive sites in the area – as required by the oil spill response plan for the region – and learned that boom is now being placed at the tidal inset for the marsh at Chrissy Field.

This morning, a barge ran aground in shallow water just off Marina Green on San Francisco's northern shoreline. Boom has been deployed to contain oil which was seen leaking from the vessel, and the Coast Guard is on the scene.

Baykeeper legal associate Andrea Kopecky and skipper Adam Simmonds have headed out on the Baykeeper boat to investigate the incident. The latest reports suggest that only a small amount of engine oil has leaked from the barge, which could be carrying up to 3,000 gallons of diesel fuel. Read more and see video from KGO-TV.

Baykeeper will continue to monitor the situation as it unfolds.