Reducing Mercury in the Bay

Mercury is a toxic heavy metal that collects in the aquatic food chain and harms fish, birds, marine mammals and humans. Mercury in the environment is often converted by bacteria to a more toxic form called methylmercury – a potent neurotoxin that remains in the environment and builds up, or bioaccumulates, in the ecosystem. Methylmercury in the food chain is linked to neurological, developmental, immunological, reproductive and cardiovascular problems in wildlife and people that are exposed by eating contaminated fish. 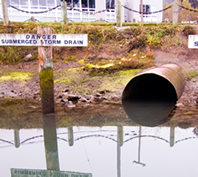 Mercury enters the Bay from legacy mining operations throughout the watershed; from contaminated sediment in the Central Valley; from storm water pollution from city streets; from industrial wastewater and air pollution; and from sewage treatment plants.

In July 2007, Baykeeper successfully concluded a decade-long fight to secure an aggressive cleanup plan to reduce mercury in the Bay. The final plan, while not perfect, calls for a reduction of nearly 40 percent of the mercury that reaches the Bay every year from hundreds of sources. Baykeeper also succeeded in advocating for other improvements, including:

Baykeeper is working to ensure that these protections are effectively implemented and enforced while also directly targeting industrial facilities, abandoned gold mines and other sources of mercury pollution to the Bay.

Tracking Mercury Pollution from Refineries and Other Air Polluters

Baykeeper has been working for several years to develop new regulatory tools to monitor and regulate airborne mercury pollution that reaches the Bay. Five Bay-side oil refineries are suspected to emit large amounts of mercury into the air that eventually deposit into the Bay and local creeks. In April 2007, at our urging, the San Francisco Bay Regional Water Quality Control Board asked the facilities to study and account for their mercury emissions within a year. Refinery representatives conducted their own private studies and now maintain that the refineries' emissions stacks are not a significant source of mercury pollution to the Bay. Baykeeper is working with outside experts to review the studies produced by the refineries and ensure that the Regional Board holds this polluting industry accountable for the large amount of mercury they release into our local environment.

Ensuring the Cleanup of Mercury from Gold Mines

In January 2007, Baykeeper reached a settlement agreement with California State Parks to clean up Empire Mine, the state’s largest gold mine, located in Grass Valley. Baykeeper is overseeing the Department of State Park’s cleanup activities to ensure that mercury, as well as other toxic pollutants, is contained on an aggressive time schedule. It is essential that historic sources around the large mine are properly contained to prevent further contamination of the Bay-Delta watershed.

For over 100 years, mining waste from the New Almaden Mine in Santa Clara County has contaminated the sediment of the Guadalupe River and local creek beds that empty into San Francisco Bay. Baykeeper worked to reduce this source of mercury to the Bay by advocating for stronger measures in the Guadalupe River Mercury Cleanup Plan. The final plan reflects many of our recommendations, including a more aggressive timeframe for cleaning up mercury contamination in the Guadalupe River.

Cleaning Up Methylmercury in the Delta

Once mercury flows down from the abandoned gold mines in the Sierra Foothills, it reaches the slow-flowing Delta and accumulates in the sediment, resulting in high levels of methylmercury. To ensure a comprehensive cleanup of the Delta’s persistent mercury problem, Baykeeper is working with environmental partners to advocate for a Delta cleanup plan that specifically reduces methylmercury. By working to secure a strong cleanup plan, Baykeeper is helping reduce the Bay’s largest source of mercury pollution while protecting communities that eat contaminated fish from the Delta.