November 2012 marks the five-year anniversary of the 2007 Cosco Busan oil spill in San Francisco Bay. Read Baykeeper’s analysis of the current state of oil spill preparation and response planning in the Bay.

Since the Cosco Busan container ship spilled 53,000 gallons of oil into San Francisco Bay in November 2007, Baykeeper has represented the environmental community in oil spill response planning. Baykeeper is the lead nonprofit engaged with the US Coast Guard Area Committee, the Technical Advisory Committee for the state's Office of Spill Prevention and Response, and the San Francisco Harbor Safety Committee, as well as in numerous on-the-water drills and exercises.

In the months after the oil spill, Baykeeper provided our expertise as the pollution watchdog for the Bay. We helped develop a comprehensive report with 190 specific recommendations for future oil spills. Download Part I (published January 2008) or Part II (published May 2008). In recognition of our work, Baykeeper Executive Director Deb Self received a Public Service Commendation from the Coast Guard, the agency's highest civilian honor.

Baykeeper helped draft a suite of companion oil spill response bills that were considered by the state legislature in 2008, and eight bills were passed and signed into law. In 2011, Baykeeper sponsored a bill passed by the legislature that increased funding for the state’s Office of Oil Spill Prevention and Response, to allow the agency to carry out its mandates. Read more about recent oil spill legislation.

Baykeeper advocates for implementation of the recommendations developed in the aftermath of the Cosco Busan oil spill, and for new legislation as conditions change, in order to improve planning and response measures for oil spills in San Francisco Bay. 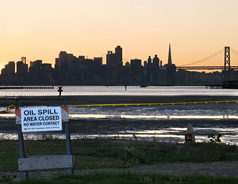 In our work responding to the Cosco Busan oil spill and through our subsequent investigations, Baykeeper identified several key priorities for oil spill policy reform.

Prioritize the most critical ecological sites for immediate protection (Current Status: Still a top priority).
The Area Contingency Plan identifies 232 sensitive ecological sites around the Bay. These sites should be evaluated based on strict ecological criteria to identify which are most critical to the healthy functioning of the San Francisco Bay and coastal ecosystems so that they can be prioritized for emergency response measures.

Prepare response plans at the local level (Current Status: Accomplished).
Response agencies at the county and municipal level should develop Local Plans in conjunction with the San Francisco Area Contingency Plan (which governs regional emergency response for the Bay Area). Resources available through local agencies and mutual aid alliances – such as trained staff and cleanup materials – should be inventoried so that they are taken into account and utilized during an emergency response.

Local agencies also should participate in the design, execution and evaluation of emergency response drills for priority ecological sites within their jurisdictions. These drills should be designed to test challenging situations such as spring tides and low visibility.

Make use of incoming information (Current Status: In progress).
The Unified Command (the committee in charge of implementing the Area Contingency Plan in case of an emergency) must actively seek, evaluate, and act upon information from the field. This is particularly important in low-visibility situations when information from overhead flights is not available. Radio channels used by fishing boats should be monitored by Vessel Traffic Service (an operation of the US Coast Guard, meant to coordinate the safe transit of vessels in San Francisco Bay) and reported through the Coast Guard to the Unified Command. A hotline for public reports of oil and oiled wildlife should be operational immediately but no later than 90 minutes after a spill occurs.