Controlling Development in The Delta

In August 2007, Baykeeper successfully concluded more than three years of work to secure an agreement from the Port of Stockton that it will reduce the environmental impact caused by an expansion of the Port. In 2004, Baykeeper, the Natural Resources Defense Council and homeowner groups sued the Port of Stockton after it approved the West Complex expansion on Rough and Ready Island without accurately assessing the environmental impacts of the project or adopting meaningful pollution mitigation measures as required by California law. The Port has announced that it will take significant measures to avoid environmental damage to the Stockton Deep Water Shipping Channel and the waters of the Sacramento-San Joaquin River Delta. 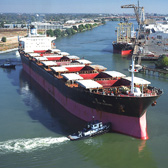 Specifically, the Port will dredge only in the second half of every year in order to minimize disturbance of plant and animal communities; input oxygen critical to aquatic organisms’ survival when it becomes scarce; and take steps to ensure that contaminated sediment removed through the dredging process will be safely stored or reused. Sediments surrounding the expansion area are laden with various toxic pollutants such mercury, PCBs and pesticides from stormwater and agricultural runoff. The Port and Baykeeper will carefully monitor dredge material placement sites for adverse environmental effects.

As it was originally proposed, the Port’s expansion project would have been an environmental disaster for the already critically impaired Delta. This agreement, however, demonstrates that the Port can serve the economic needs of Northern California and be held responsible for reducing harm to the environment.