In July 2009, Baykeeper successfully settled lawsuits against Hillsborough and the Burlingame Hills area to reduce sewage spills that contributed to sewage pollution in San Francisco Bay. These settlements followed Baykeeper’s August 2008 legal victory, when we reached an agreement with nearby Burlingame to improve its sewage infrastructure.

Baykeeper brought suit against the City of Burlingame after discovering that the city had a very high sewage spill rate. Burlingame’s 80-year-old sewer system frequently overflowed, causing untreated sewage to flow into homes, creeks and the Bay. Additionally, Burlingame’s sewage treatment plant regularly discharged wastewater through an illegal discharge pipe at Coyote Point during large storms – a particularly troubling situation given the large numbers of windsurfers and kiteboarders who recreate in the area. 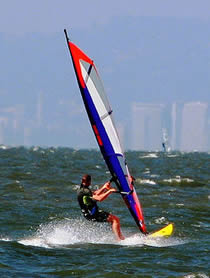 In August 2008, Baykeeper reached a successful settlement with Burlingame to reduce sewage spills to the Bay. Burlingame agreed to substantially improve its sewage infrastructure over the next ten years, including stopping all spills during normal storm events; spending tens of millions of dollars to make collection system improvements; and undertaking a study to identify capacity problems and eliminate near-shore discharges. To help remediate the impacts of their past pollution, the city also agreed to invest $250,000 to fund projects by other nonprofits to help restore the San Mateo County watershed.

In the course of our legal action against Burlingame, Baykeeper discovered that the Town of Hillsborough and the Burlingame Hills area were contributing to Burlingame’s sewage spill problems. Hillsborough and Burlingame Hills are “satellite” sewage collection systems that send sewage to Burlingame for treatment. Baykeeper investigations revealed that the satellite systems were poorly maintained and operated and frequently spilled sewage into streets and nearby creeks that lead to the Bay. This poor maintenance also contributed to problems downstream at the Burlingame plant, including the illegal discharges near Coyote Point.

Under our settlement agreements, Hillsborough and Burlingame Hills agreed to dramatically curb sewage spills by 2014. Hillsborough also agreed to contribute $50,000 to projects that help protect the San Francisco Bay and its watershed, including a program to provide low-cost loans for residents to replace failing sewer pipes; the smaller Burlingame Hills area will invest $15,000 in watershed protection projects, including efforts to educate residents about how they can help reduce sewage spills.

Read about Baykeeper’s other legal actions to clean up sewage spills to the Bay.