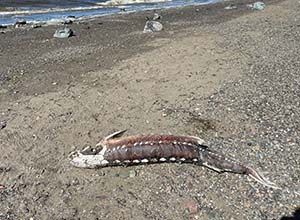 The Bay’s unprecedented “red tide” algal bloom has almost completely gone away. SF Baykeeper continues to advise caution against contacting murky, discolored waters and encourages reports of these conditions to its Pollution Hotline.

Low dissolved oxygen conditions and fish kills that followed this summer’s algal bloom, commonly called “red tide,” have come to an end. It is unlikely these conditions will re-emerge this year. However, because the conditions that fueled the bloom—excessive nutrients in the water, sunlight, and warm, slow moving water—are common throughout the Bay, Baykeeper remains concerned that harmful algal blooms may emerge again next summer and beyond.

Starting in late August, we received increasingly frequent reports of unprecedented numbers of dead fish—including large sturgeon, sharks, rays, and striped bass, as well as masses of smaller fish—in the water and on shorelines. Reports of dead fish, and particularly newly killed fish, tapered off significantly by early September.

Now that the active bloom appears to have ended, and cooler shorter days are likely to prevent further blooms this year, our scientists will continue to collaborate with relevant agencies and researchers to determine the specific trigger for this year’s bloom and to increase our understanding of how we can prevent new blooms and tragic fish kills in the future.

While the organism that formed this bloom, Heterosigma akashiwo, is not generally considered an acute risk to people we advise caution when considering recreating in the Bay or consuming fish, and particularly shellfish, caught in areas where any algal bloom is present. Also, future blooms may be caused by completely different organisms, some of which are much more toxic that H. akashiwo – Baykeeper advises caution when entering any water that is discolored, especially during late-spring and summer. Please report suspicious looking or smelling water to our Pollution Hotline.

We're encouraging our supporters to send a message to San Francisco officials to urge the city to invest in water recycling technology to help prevent algae blooms and fish kills in the future and to reduce the city’s over-reliance on the Tuolumne River, which was once a major spawning ground for Chinook Salmon and Steelhead that traverse the Bay.

You can also sign our letter to the SF Bay Regional Water Quality Control Board compelling the agency to invest in nutrient pollution research and to reduce nutrient discharges into the Bay.