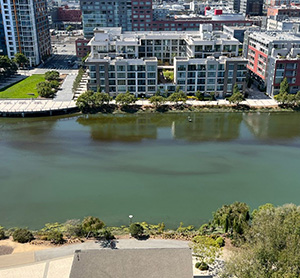 Algae thrive in warm water that receives lots of sunlight. If the water is stagnant and the concentration of nutrients, like nitrogen and phosphorus, is high then existing algae can reproduce exponentially and lead to a bloom.

San Francisco Bay has some of the highest levels of nutrient pollution of any estuary in the world. The San Francisco Public Utilities Commission (SFPUC) and other Bay Area wastewater utilities don’t remove these nutrients from wastewater before it is released into the Bay and ocean. One of San Francisco’s two water treatment plants dumps treated effluent with high levels of nitrogen and phosphorus—the building blocks of algal blooms—directly into the Bay.

As a result, San Francisco Bay is fertile territory for harmful algal blooms like the red tide we just experienced. In short, the Bay remains at grave risk of future harmful algae blooms and fish kills.

But there is a solution: San Francisco and other Bay Area water utilities can do a better job of removing pollutants before they discharge wastewater into the Bay by committing to and investing in wastewater recycling. In a win-win for people and the environment, this approach can also help San Francisco to reduce its overall water consumption, so it is less reliant on its main water source, the Tuolumne River.

Every gallon of recycled water means more water can remain in our rivers, flushing out pollutants and harmful microorganisms and supporting salmon and other fish populations. And unlike traditional wastewater management methods, recycling requires removing all potential pollutants from the water before its reuse – the nutrients can then be disposed of responsibly.

Shockingly, despite it's reputation as an environmental leader, the City of San Francisco is not on board with water recycling. Unlike its southern California peers, San Francisco currently has no plans to make recycled water widely available in the next 25 years.

Instead, the city is pursuing multiple expensive and misguided lawsuits so that it can continue to rely, almost exclusively, on the Tuolumne River—one of the state’s most overtapped rivers—for the next several decades. San Francisco and large agribusiness water districts divert four out of every five gallons of water that flow in the Tuolumne River during a typical year, and the fraction diverted is higher in drought years.

SFPUC has an opportunity to course-correct and serve as a model for utilities across the Bay. Let’s make sure that they do!

Send a letter to San Francisco Mayor Breed urging her to invest in water recycling for the sake of a clean, healthy Bay, Delta, and Tuolumne River