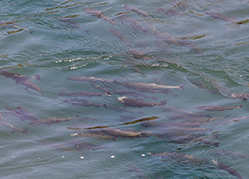 During this year's extreme drought, anti-wildlife policies put in place by the Trump administration are decimating salmon in the Bay watershed. These Trump-era holdovers are also threatening other species, as well as the livelihoods of Indigenous people and fishing communities who depend on these fish. Yet to date, neither the Biden administration nor Governor Newsom has formally moved to do anything about it.

Trump's legacy policies have allowed massive state and federal water projects to increase water withdrawals from Northern California's Bay-Delta Estuary, gutting protections for salmon and other endangered species—and threatening water quality, orcas who depend on salmon to survive, thousands of fishing jobs, and drinking water for millions of Californians.

Support Baykeeper’s advocacy by signing the letter below to ask Secretary Haaland to immediately withdraw the reckless "biological opinions" issued by the Trump administration for California's Bay-Delta ecosystem, and to direct the Bureau of Reclamation to operate Shasta Dam for maximum protection of the Sacramento River’s Chinook salmon populations. Only swift action by the Department of Interior and its Bureau of Reclamation can avoid wiping out these ecologically critical and unique fish.

The Bureau’s operational plans are projected to kill 50-80% of this year’s winter-run Chinook salmon before they hatch—and the mortality will be even worse among fall-run Chinook salmon eggs. Unfortunately, the Newsom administration’s State Water Resources Control Board recently sanctioned the Bureau’s lethal activities, despite the fact the Water Board’s own rules say that the feds must protect the salmon fishery from high water temperatures below Shasta Dam.

To make matters worse, during the first half of May, the Bureau dumped hot water from Shasta Reservoir on migrating winter-run adults in a misguided and uninformed effort to save cold water for the summer and fall salmon incubation season. This flow of hot water killed adult winter-run Chinook salmon before they could spawn and lay eggs, and left even more struggling to survive—some are covered in a fungus (the white patches visible in the photo above) that will prevent them from seeing potential mates, competitors, or predators.

Governor Newsom’s administration has failed (yet again) to protect our priceless salmon, rivers, and water quality. Our only remaining hope for Sacramento River Chinook salmon this year is for intervention from the Biden administration. That’s why we’re sending pleas for help to Secretary of Interior Deb Haaland.

Your Message to Secretary Haaland